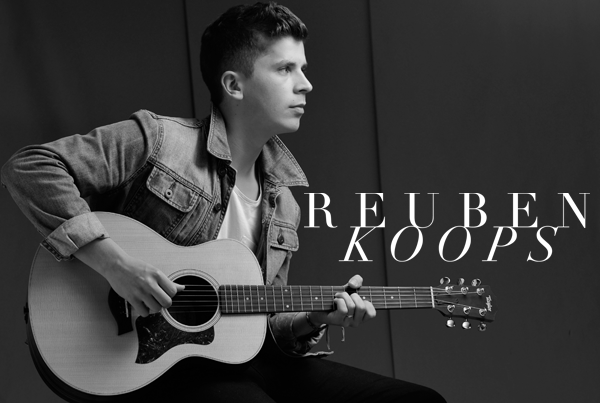 Reuben Koops found success on a famous Australian reality television show in 2013 in which he performed his original songs to over 1 million viewers across metropolitan and regional areas of Australia. Shortly after this, he released his debut album ‘Where You Water It’ and was a finalist in the prestigious talent development program Telstra Road To Discovery which led to him supporting Olivia Newton John and John Farnham on their ‘Two Strong Hearts Tour’. Koops released the ‘Slate EP’ in March 2015 which was mastered by Grammy Award winner William Bowden.
At the age of 24, in 2017 the Australian singer/songwriter spent time in Los Angeles working on his next release with renowned producer David Ryan Harris (John Mayer, Guy Sebastian, India.Arie, Alicia Keys, Mariah Carey). David enlisted the work of some of LA’s top session musicians including Sean Hurley on bass (John Mayer, Rob Thomas), Jeff Babko on keyboards (Frank Ocean, Jason Mraz, Sheryl Crow), and Victor Indrizzo on drums (Macy Gray, Seal, Damien Rice). Shortly after, Reuben made headway after completing his first tour of the US/Canada. Amongst other shows, Reuben played three iconic singer/song-writer venues including the famous Hotel Cafe in LA, which has gained a reputation for establishing the careers of notable singer/songwriters such as John Mayer.